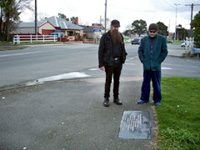 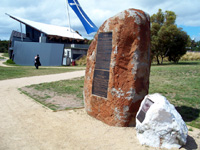 'Bakery Hill is obtaining a creditable notoriety, as the
rallying ground for Australian freedom.
It must never be forgotten in the future history of this
great country, that on Saturday, Nov. 11th, 1854,
on Bakery Hill,and in the presence of about
ten thousand men, was first proposed, and
unanimously adopted, the draft prospectus of
Australian Independence.
We refer to that of the Ballaarat Reform League.'

This plaque was placed in 2004 by the Ballarat Reform League Inc
with the assistance of The Vera Moore Foundation.

From our own Correspondent. 29th Nov. 4 am
Ere many minutes the sun shall have risen on a day fraught with interest,
pregnant with the destiny of Victoria and consequently of Australia. 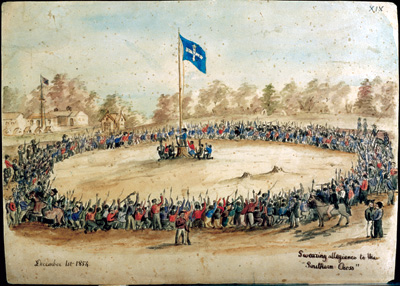 Charles Doudiet, 'Swearing allegiance to the Southern Cross' 1854
Watercolour purchased with the assistance of many donors, 1996
Reproduced with permission of The Art Gallery of Ballarat.

This watercolour is the only visual record of the crucial meeting held at this spot on
30th November 1854. It shows Peter Lalor calling on those present to swear allegiance
to the Eureka flag, the Southern Cross.

We swear by the Southern Cross to stand truly by each other
and defend our rights and liberties.

On the previous day, the 29th November, a Monster Meeting of 10,000 to 12,000 men
gathered for the first time around the new flag and heard of the failure of the talks between
their delegates and Governor Hotham and angrily rejected any further conciliatory moves.

At 3 o'clock an impromptu meeting was held on Bakery Hill, when volunteers were called for
... They assembled round the Australian flag ... They all knelt down around the flag,
swore to defend each other, and prayed heaven to prosper them

Site of the Star Hotel in Main Road

This plaque was placed in 2003 by the Ballarat Reform League Inc
with the assistance of The Vera Moore Foundation.

At this place in the early hours of Sunday 3 December 1854, there was a defining moment
in Australia's history. Without warning, a superior government force attacked a makeshift
stockade built by a few hundred angry men to defend themselves from further armed hunts
to enforce the unpopular licence tax to dig for gold.

The tax was a lesser irritant than the corruption of Ballarat officials, gross miscarriages
of justice, and lack of sympathy for the extraordinary dangers and financial risks taken
by partnerships of diggers and storekeepers in the deep sinkings. As the Ballaarat Times
said on 28 October:

It is not fines, imprisonments, taxation and bayonets that is required to keep
a people tranquil and content. It is attention to their wants and their just rights alone
that will make the miners content.

Months of unrest culminated on Thursday 30 November 1854 with a provocative licence hunt by
police and soldiers. Aimed to crush criticism the hunt only created fury. The most
belligerent rushed to Bakery Hill where the flag of the Ballaarat Reform League
proclaimed community concern for civil liberty and constitutional rights. Led by Peter Lalor, an
Irishman, they swore by the Southern Cross to hazard all in defence of their rights.

Protest had been turned into resistance, which the authorities interpreted as insurrection.
They believed that attacking the stockade would save the colony. Many lives were lost in
an unnecessary battle, for which the government was condemned.

Because the terrible system failure discredited the gentry who ran it, the democratic
outcome was social as well as political. By their sacrifice, the brash stockaders had achieved
the peaceful goal of the Reform League and had hallowed its Southern Cross flag.

International reaction to the Eureka Stockade

By March 1855, as ships bearing news from Australia arrived, newspapers around the world
carried stories of the Eureka Stockade. In some papers reports of the mass meetings and battle
took precedence over reports about the Crimean War.

The greatest attention to the story was in England. But it was also reported in other countries
including France, Ireland, Italy and the United States of America.

In London it was initially described as an insurrection. In the USA, France and Italy it was seen
as a struggle against the British government by a people seeking justice and a voice in their
own government.

After the introduction of reforms, in line with the goals of the Ballaarat Reform League, the
following report appeared in New York:

As often happens, the vanquished were the victors in the end.

The emeute (riot) at Ballaarat settled the question that the Australian deserved
independence, and they got it accordingly. It need hardly be said that had there
been a man of judgement and sense at Ballaarat, both revolt and bloodshed
might have been avoided. 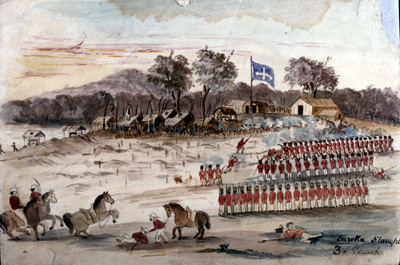 Watercolour purchased with the assistance of many donors, 1996
Reproduced with permission of The Art Gallery of Ballarat

An eyewitness view by a young Canadian digger.