With the news of further discoveries of gold more and more people rushed to seek their fortune. The Forest Creek Diggings, near Mount Alexander, saw the few diggers that arrived in September 1851 become a multitude by November 1851 as word got out about the abundance of gold being found there. 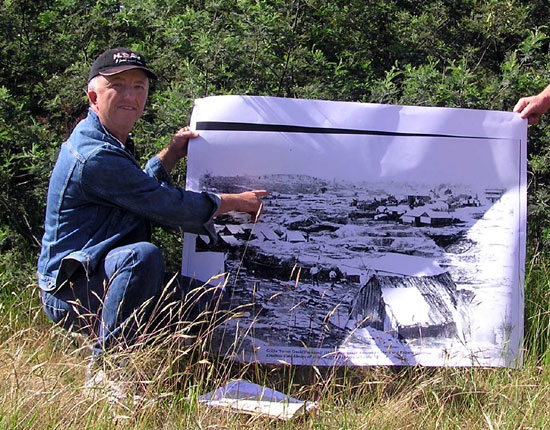 At the site as it is today, Glenn Braybrook points to the area where the Great Meeting
of Diggers took place. This is a copy of a photograph by Antoine Fauchery of the
Forest Creek Diggings, taken in 1858. This, along with original maps and drawings from
the Barbara James collection held at the Chewton Town Hall, helped to identify the site.

The colonial government in Melbourne proposed doubling the already unpopular licence fee from 30 shillings to three pounds, paid in advance. The resentment and frustration expressed by the diggers at this new outrage led to a public meeting near the shepherd's hut on the Forest Creek Diggings at 4pm on 15th December 1851. It is believed that around 14,000 people attended the meeting.

Because of the huge numbers of diggers that came to the meeting it became known as The Great Meeting of Diggers.

The meeting was a peaceful one. It was recorded in a drawing by David Tulloch and later engraved by Thomas Ham. The image of the engraving as well as early maps and drawings of the Diggings at Forest Creek were used to determine the exact site of the meeting in what from 1856 became known as Chewton.

The monument to this significant meeting is placed near the site of the former shepherd's hut. 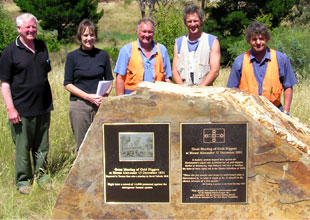 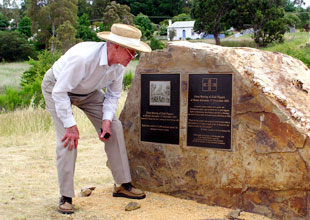 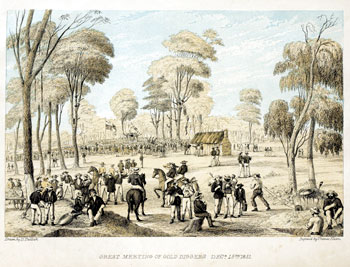 Great Meeting of Gold Diggers
at Mount Alexander 15 December 1851
Engraved by Thomas Ham after a drawing by David Tulloch, 1852

Right here a crowd of 14,000 protested against the
outrageous licence system

A massive protest erupted here against the
Government's unjust and exorbitant tax on gold diggers.
Earlier at Buninyong, then Ballaarat and later at Bendigo
the issue of basic rights led to the Eureka Rebellion of 1854.

"There are few people who properly understand what a
Government is, or what it ought to be. It should be the
chosen servants of a free people."

Mr Booley, a speaker at the Great Meeting 1851

Location of the Chewton monument

Golden Point Rd, Chewton. Turn north off the Pyrenees Highway, where there is a prominent sign indicating the direction. The plaques are on the left hand side of Golden Point Road, less than half a kilometre from the turn-off. 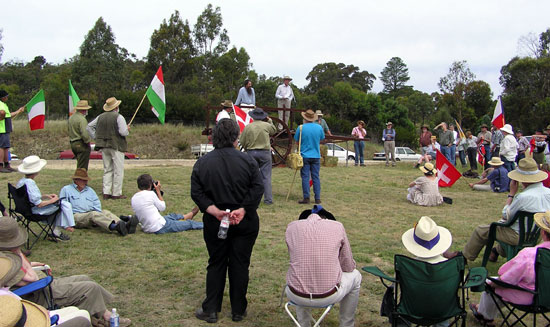 John Semmens of the Ballarat Reform League Inc. and Professor Weston Bate stand
on the dray addressing the crowd at the unveiling of the monument 15 December 2005.